The evening of 5/22 brought a gusty southeasterly breeze at about 15 knots (with some puffs higher). Temperatures at WNR start time were in the 70's and the racing conditions just don't get much better than this. Unfortunately (for me), my neuroscience final exam was at 8:30 AM on 5/14 so it was not a good night for me to be out racing sailboats. In anticipation of a night spent studying, I corraled my regular crew into representing the fleet in my absence. However, after a solid day spent studying, I decided that I could afford to take a break for a couple hours and go along. However, I also decided that I would forego the driving responsibilities in the interest of getting my crew ready so that they could participate in future races in my absence. Therefore, I had Mike Meinhold take the helm and all I did was make polite suggestions to everybody from the companionway (well, that's mostly what I did anyway...)

The start was highly boat favored there were at least 2 boats who were caught barging and had to peel off. We were a bit late, but we got a decent start at the boat with clear air and I said to Mike that clean is better than on time. We tacked a bit early for the layline to the cone, but it wound up being fortuitous as we were able to watch Brian Palmer go too far on port until he ran aground at which point I politely suggested we should tack before the same thing happened to us. I was able to get 2 choice photos of Brian trying to unearth himself: 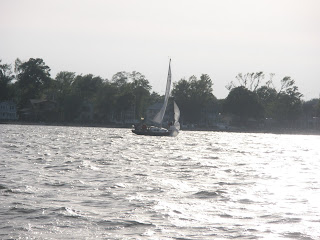 I guess they thought dropping the jib was going to help them get off more quickly? 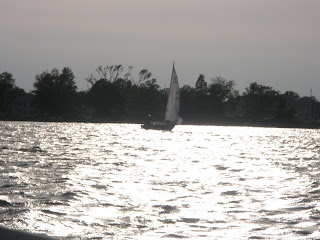 Note to self: don't sail past the Back Creek channel. It gets mighty shallow in there...

Well fortunately we did succeed in avoiding Brian's fate, but unfortunately we were inside the starboard tack layline. No matter, we proceeded ahead and were close to Harry at the last cross. He did manage to hold us off at the mark, though, and the 2 extra tacks slowed us down as well.

We elected not to use the spinnaker on the way down due to the puffy conditions and the fact that we were making hull speed anyhow. Tim Williams did use his and clearly it worked to his advantage as he managed to pass TC who led at the first two marks to take the bullet. Harry came 3rd, we came 4th and Brian (after extricating his keel from the mud...) came 5th. I will let Tim comment on what he thought was particularly fast getting around the course, since he won the race, he clearly knows better than I do. I am sorry that I didn't get a picture of him broaching after he came around the windward mark. It was impressive...next time I will not be so slow on the shutter...

All in all, it was an agreeable night on the water, with fresh breezes, agreeable temperatures, and even a little studying squeezed in between. Thanks to my crew for driving and operating the boat so that I could study! And for those of you who are curious, I did manage to pass neuroscience. I did not achieve the 90% that Don C suggested before, but I learned a ton, and I actually really enjoyed the subject...maybe because I got to do some sailing while studying it. Maybe I'll become a neurologist...who knows?

WNR series results are online at: 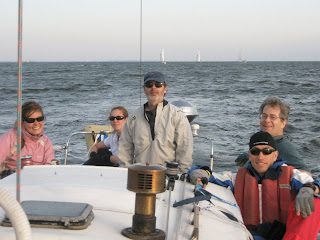 What a great crew, huh? Note the barbecue. That is the extra secret sauce on the S/V Calliope program...
Posted by J Bergquist at 6:35 AM