The Alberg 30 Association is happy to announce this year's edition of the Bruce Rankin Regatta.
Essential Documents:

We look forward to racing with you there!
Posted by Jonathan Bresler at 8:11 AM 1 comment:

The thing about these night races is that it is not clear why we have fun doing them. However, in polling the crew, everyone had a good time.

This was a tough race.

The course is 48+ miles long, and half of it is up wind, and the wind was blowing a fairly constant 20 knots. We sailed a total of 60 miles. From Annapolis to the point we headed back took us from 7:20pm to 3:00am – almost 8 hours. From the turn back to the finish line took us four hours – we finished a few minutes before 7:00am. The eight hours up wind was a pretty rough ride in the scheme of things. Not rough in that the waves were big, but rough in the sense that the waves are precisely the wrong shape for a boat with a 21 foot waterline.

Three of us crossed the starting line.  We crossed the start line on port tack with Woodie (Latika) and Mike (Skybird) both on Starboard. We did not have a particularly good start, with Skybird ahead, but the way the line was set, the move on port tack heading towards Back Creek put us upwind of everyone when we tacked over, and we managed to get ahead at that time. Skybird had some technical issues and dropped out before the first mark off Tolly Point (Bay Ridge), and Latika and us went off to the mark off Hacket Point, and then from there essentially down to the mouth of the Choptank by Sharp Island where we turned right (2:00 am) and crossed the bay close hauled to another mark (3:00) and then back to Annapolis (7:00). Apparently we were fairly close at times as Latika was able to see us when we used the flashlight to check the sails. When the sun came up, we had headed to the wrong #1 mark on the way back so we took a detour too far to the west and Latika made up some ground on us. We crossed the finish at 7:00 and Latika about 30 minutes behind.

So we went up wind in 20 knots of wind for 8 hours, and then downwind for 4 hours with the last three with the spinnaker up. The RaceQ tracks are below.

The track of laughing Gull - Start to Midnight 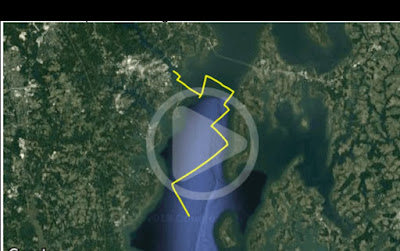 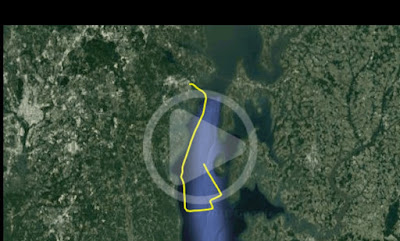 These take a little while to load. The funny thing is that the phone was upside down, so the boat shows as being capsized the whole time, and right at the finish you can tell when we get tied up as the phone is put right side up, and the boat rights itself!

Last year was a gorgeous easy race. This year gorgeous, but a bit of a ride. You take em as they come; wind no wind, shooting stars or clouds. While we do not do it for the stories we could tell. These are the stories we tell (Apologies to Jimmy Buffet). 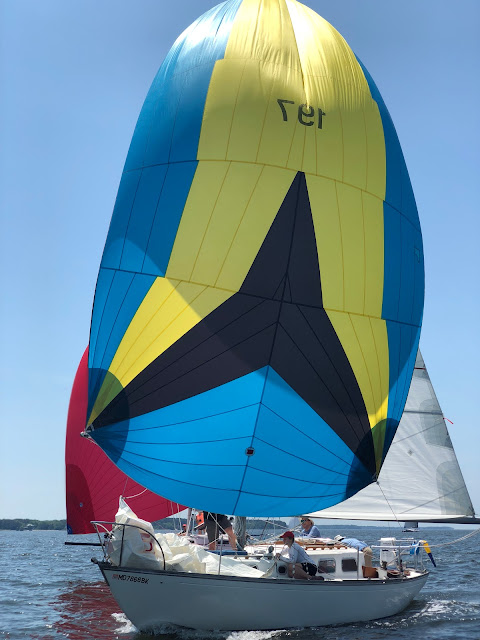 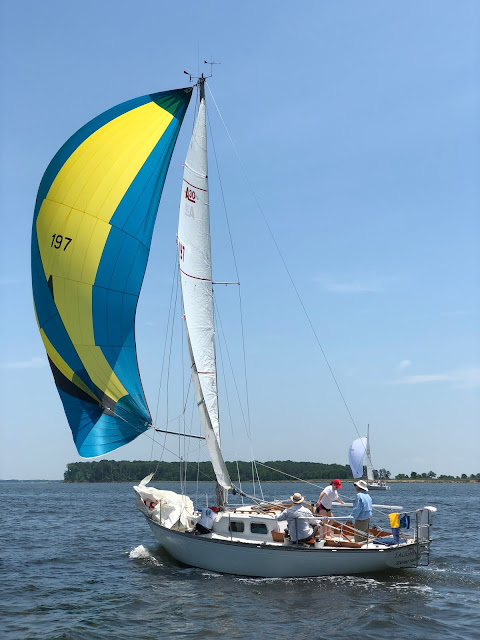 The racing season is about to begin!

Six boats are registered for the 2018 Annapolis NOOD Regatta: Argo, Constance, Latika, Laughing Gull, Second-2-None, and Windswept.  The field is a bit smaller this year due to one skipper having to attend his daughter's graduation from college, another skipper delayed in boat prep due to the unseasonably cold months of March and April, and another boat in the midst of a repair.

Nonetheless, the Albergs will race in this the 30th edition of Annapolis NOOD Regatta.  Due to fewer boats registered, six this year vs nine last year, they competition may be fierce.  Committed racers have been making sure that they have ride.  Each skipper will be bringing their A team.  Might be needed.  Last year, winds blew quite strongly, making the skipper forego the use of spinnakers on some of the downwind legs.  Given the unusual weather patterns so far this year, its anyone's guess as the weather we will encounter.