A beautiful late spring day greeted the 6 Albergs who showed up for the 2009 Ted Osius regatta on Sunday. In the beginning, it was not totally clear that there was going to be good breeze and the race committee postponed the first start, but once racing got underway, we were blessed with an excellent southerly at 8-12 knots and perfect racing conditions. Two races were sailed in a relatively steady breeze. There was a pretty strong ebb current during race 1 which gradually abated over the course of the day. TC Williams put on a clinic, leading both races from wire to wire and honestly he pretty much did a horizon job on the rest of us. Full results are reproduced below. Note that the finishing order was exactly the same for both race 1 and race 2. Congratulations to TC Williams on the convincing regatta win!

A couple of things I would like to highlight in addition to the racing. First, Jonathan Adams was pulled away at the last minute because of a death in his family. I am sure that I speak for everyone in offering condolences to him, his wife, and his family. We missed you out there on Sunday Jonathan, and I hope that you all are doing okay. I am sure it is difficult.

Second, I want to highlight Mike Meinhold for putting together a team to come out and participate in this race. Mike has a lot of experience racing with me as a bow crew, but I believe this is only his 2nd or 3rd race as a skipper. He did a great job of getting around the course, and I hope that we will see more of Mike out there on the race course.

Third, I want to highlight the party that SCC puts on Sunday for this regatta. I believe that TC and I were the only people from our fleet who attended the party (I did not arrive until very late). I spoke with Mrs. Osius-Zimmerman at the party and she was very nice to me, but lamented the fact that not more of the Albergers make the effort to come to the party. In particular, she said that she wished that Harry would come to the party as she said that she has not seen him in many years and would like to catch up. So Harry I hope you will consider going next year. I was ashamed to admit to her that of the 5 times I have done this regatta, this was the first time that I had attended. I think it's important for us to keep in mind that Ted Osius was an Alberger and that we should try and make an effort to attend the party. I hope that those of you who did not attend this year will try and put it on your schedule to attend not only the sailing, but also the party afterwards in the future. I think it is a nice gesture for us to say 'thanks' to Mrs. Osius-Zimmerman for hosting the event.

Fourth, I want to highlight the Luce Creek Cruise which was hosted by Vicki Lathom on Saturday before racing. Unfortunately, despite my best intentions, I was unable to attend because of an emergency boat mishap. However, Mike M attended and it sounds like it was a great party. I think that having a Luce Creek Cruise the same weekend as the Osius regatta is an excellent opportunity for Magothy boats to come down and split their travel time up so that they don't have to come all the way from the Magothy on the day of racing. It's also a great chance for everybody to socialize together. I want to thank Vicki for hosting this crusie, and I hope that she will host it again on the Osius weekend next year.

Finally, I got a couple pix from my boat to share with y'all. Sorry, no pix of the fleet, although in pic #2 you can just make out Harry and Lanny in front of me :-( 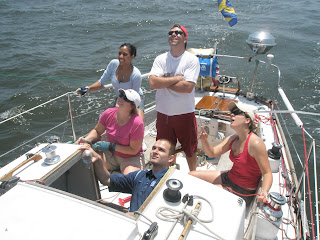 Despite our obvious focus, we still managed to be relatively slow... 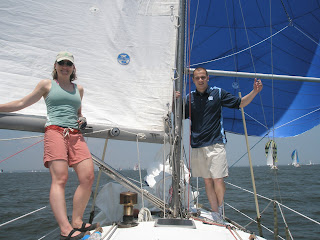 We were lucky to have an excellent bow and mast crew! I think the main problem with boatspeed was that the nut on the end of the tiller needed adjustment...