Once again we had good winds (8-10 knots) for the Wednesday Night Race in Annapolis. However this time it was from the Northwest, meaning a spinnaker start. Five Albergs were racing this night but apparently everyone had a different idea on where to start. Calliope won the start, running the line towards the boat with a smart turn downwind a quick spinnaker set at the gun while I was still turning the boat back downwind. By the time we crossed the line to leeward of Calliope and started setting the chute, she was several lengths ahead. LinGin started down by the pin but was on the line with her chute up and drawing at the gun, while Second-2-nun and Argo had their own spots on the line.

I felt good during the run, as we were gaining on Calliope. When I told my crew we were hoisting the jib at the next mark my spinnaker trimmer (Jen) at first didn’t believe me. To her it seemed the race had just started, yet we really were well past “A” and approaching the outer mark. Then I looked back to leeward and saw LinGin coming up towards us, closing fast. How do they do that? Approaching the mark I briefed the crew on the plan: gybe the chute, then hoist the jib and douse the chute. After watching LinGin hoist her jib before the mark and remembering how badly we screwed up that same rounding sequence the previous week [my fault, but that's a whole other story], I too decided to shift to the jib before rounding.

Calliope round first, followed by LinGin just ahead and inside me. We did a good job getting the jib up and chute down, but the jib hung up on the topping lift when we jibed. After cleaning that up we were several lengths behind Calliope and LinGin, in their bad air and that of a J/30, so we tacked away.

On the way back into the river the wind started to fade and got a bit spotty. Calliope and LinGin had tacked and crossed ahead, while I stayed on port, with a friendly wave across from a J/30 (thanks, Deck Works). After threading through the Etchells and other classes converging on the red daymark “4” from their own rounding mark, it looked like the boats far ahead were getting headed more and more the further in they went. Looking to stay in better breeze and not end up so far to the right of the nun, I took a hitch left shortly after passing the daymark. Also the fathometer, which had read over 20 as we passed the daymark, now suddenly said 8.7....

By the time we reached the nun LinGin and Calliope were well on their way to Spa Creek. LinGin had stayed on starboard towards EYC while Calliope went over to port and headed towards the Naval Academy seawall. As we approached the creek we seemed to be gaining on Calliope, but I couldn’t see LinGin. Why hadn’t they come back and crossed us yet? Finally, I found them. They were to the left of EYC and had been forced to hold an impromptu swim call.... 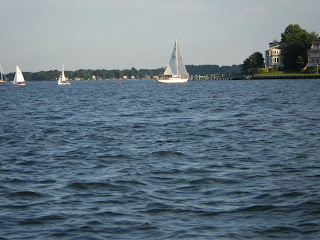 Unlike the last few weeks when I went through the mooring field, this time the direct path from 1SC to the finish looked clear. Calliope had gone to the right through the moorings so I had a chance, if only I could make the mark without another tack in the fading breeze. I thought we were doomed when some waves hit us about a length from the mark, but we were just able to shoot up and around it. Now we just had to keep our speed until the finish. As Calliope and another boat came around the corner of the Annapolis Yacht Basin and headed up for the finish we were closing from astern and about half a length to leeward. Could we catch them in time? After what seemed like an eternity thinking “are we there yet? are we there yet?...” the RC called “550, over!” I never heard them call 287 over, it was that close. A crewman of mine sitting just aft of the mast said he was even with Calliope’s mast at the horn, so that’s a margin of what, 18 inches? Does AYC have the photo gear set up to record a photo finish? I have never been in a closer race. Oh, and if anyone thinks a clean bottom isn’t that important, Skybird’s hull had been cleaned that morning - there’s no way I could have passed Calliope without a fresh bottom. As Calliope and I headed back out there was LinGin heading to the finish, amazingly recovering to finish third. Tim certainly owes a beer to whichever crew member dove in to push the boat off the mud that fast.

Wow, what a way to head into the July fourth holiday and WNR off-week. Next comes the Race to Solomons. Who’s joining us?
Posted by Mike at 10:24 AM