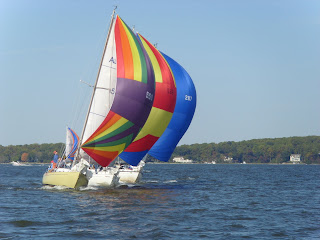 Skybird fends of Windswept and Calliope in a tight race on Sunday. (Photo courtesy Mike Lehman)
The Bruce Rankin Memorial Canadian Friendship Team Race Regatta went off last weekend with great breeze, excellent parties, and great company. A good time was had by all especially at the Friday night pot luck, which I described to one bystander as 'a very lucky pot luck' because there was a lot of excellent food prepared by the attendees! The sailing was great too, and yours truly did so much hollering that I ended up hoarse which was tough to explain when I had to do my case presentation at Family Medicine on Tuesday.... But I digress from discussing the racing.
Saturday was WINDY. There were some puffs over 30 and most of the day the wind was sustained in the 20's except near the windward mark where there would be lulls into the teens. There were big shifts as well and differences in pressure. With the westerly breeze, the south shore of the river seemed to have favorable pressure and angle for most of the day. 2 races were sailed on Saturday. Tim Williams won both of them going away. No spinnakers were used, which made sail selection a challenge because if you picked the #2 then once you went around the windward mark, you were underpowered. A variety of sail combinations were tried, but Tim stuck with a reefed main and #1 and that seemed to be fast. He was really able to keep the boat going even with being overpowered. I asked him and Glen about it afterwards and he said they felt like the #1 was the right sail for the day but that they had to drop the leads way back to flatten the bottom of the sail, they used a lot of reef tension to get good outhaul effect on the main, dropped the traveler down, and went super tight on the backstay. We tried using a #2 on board Calliope, but our #2 is small and the clew is high. We felt like it was not a good sail combination and we were not fast in the race where we used it. The one big loss we had on board Calliope was a winch handle which failed a float test. This would be a key problem later in the regatta.

Tactically, the racing on saturday basically involved keeping close to the south shore of the river (left side of the beat) because there was more pressure down there and fewer holes in the breeze. This was Team LinGin's tactic all day and it really worked as they won both races going away. Fortunately for us they were our teammate, but even their 2 bullets were not enough to salvage our lackluster performance and the team of Laughing Gull and Second-2-Nun were ahead of us by 1 point on Saturday.

Saturday's party was excellent with barbecue from Adam's ribs and the famous Alberg 30 bar. We had a long evening eating and drinking and chatting around the fireplace at PSA and I didn't head back to the boat until nearly midnight.

Sunday dawned bright and clear and after a breakfast of leftover coffee and apple pie and a shower in the AWESOME new heads at PSA, I was ready to take on the day! Jon and I had decided on Saturday night that we were going to focus on going fast from the time we left the dock so on the sail out to the course, we got the spinnaker up, did a bunch of practice gybes, practiced sail handling and got the crew comfortable with their respective positions. It was a good way to warm up. Fortunately we got to the starting area early, were able to get some numbers on different tacks, and figure out what the course was going to be like. With a much lighter 10-15 knots of breeze, we knew we would be using spinnakers and we felt like that was good for us. The breeze was still out of the west but was further to the left than it had been on Saturday, making the setting of the course axis a bit of a challenge for the RC. Once they got the line set we realized that it was highly skewed and nearly impossible to lay the pin on starboard even if you sailed close aboard the stern of the committee boat. We spent some time discussing start tactics because this was obviously going to be a challenge. We considered a port tack start because that was obviously going to be the favored tack, but I felt that if we did a really good job of timing the starboard run, we could do well by making a timed run at the boat, then hardening up on starboard and sailing down the line. If we could manage to win the pin we would get a favored start by several boat lengths and it would put us in control of the race. So this is what we decided to do. We spent a good bit of time sailing down the line in the pre-start and making timed reaches at the committee boat. By our watches, the line was about 1:30 on a close hauled course, so we wanted to go around the committee boat stern with that much time left on the clock. We managed to make this work out quite well in the pre-start. I thought for a second that John Maliszewski would be able to close the door on us at the boat as he was below us but it turned out he was too low and couldn't quite get there so we were saved from the barge. Then we had only Harry in front of us on starboard, but I knew that he was too early and he looked like he would not lay the pin anyway as he had not sailed close enough aboard the boat. TC was coming in from port, but he went below us so was not an issue. All looked perfect until Harry tacked at the pin. I yelled starboard, but he didn't tack back so we had to tack to avoid a collision, which was extremely close. No matter, we still won the pin, got the boat going on port, forced Harry to take a penalty and were in control of the race. 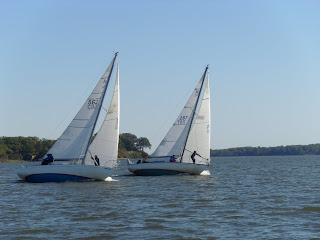 Beat 1 was highly skewed such that it was basically a one tack beat. Skybird was going fast and high and had a really high lane that we were not able to match. We went around the mark close with them and with Windswept. They both took a relatively high lane on the run which was also highly skewed and we never gybed. By the bottom mark, we had managed to gain the inside track and with a good takedown, we claimed the lead. The next beat was equally skewed. Windswept and Skybird would tack away to clear their breeze and we covered them all the way up the beat. As we passed the middle of the course, we noticed the committee boat had moved to the top and we thought that they would shorten the course and we would be finishing at the windward mark. This was not to be however, because they signaled a course change. Since we had assumed this was going to be a finish not a mark rounding, we were totally unprepared for the course change and had a complete Charlie Foxtrot getting around. Ultimately we got around the mark and got the kite up but not before Windswept and Skybird snuck past us.

The run was once again quite skewed and we had close racing with Windswept and Skybird. Toward the bottom, Skybird went very high and sailed pretty far from the mark, which confused us. We again got the inside track and were set to regain the lead with a good mark rounding which was all fine and good until we noticed that we didn't have a winch handle. It must have fallen overboard during the kerfluffle to get around the windward mark. Now we had a real challenge on our hands. We lost both Windswept and Skybird at the mark and we were sailing out to the left while I tore apart the boat looking for the winch handle and yelling at myself. We couldn't get the jib in all the way so our pointing was awful and we were in danger of being passed by LinGin, Laughing Gull and Rinn Duin. Something had to be done. At one point, while I was standing on the jibsheet to try and close down the leech, someone suggested that we use our adjustable jib leads to close down the leech. Bingo, we started dropping our leads to the back of the track, tacking, then pulling them forward, and this worked. We managed to hold on for a 5th place finish, which, combined with Tim's low scores, was enough to win us the trophy.

A huge crab feast after the awards hit just the spot. Thanks to Mike L for taking the awesome photos aboard Glory on Sunday. And thanks to PSA, Larry, Tim, John M and everybody else who made this year's Rankin Memorial Canadian Friendship Team Race Regatta a great success! 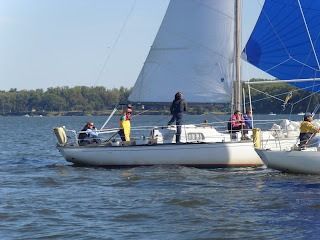 Close quarters on the run: Gentleman sailing at its best! (Photo courtesy Mike Lehman)
Posted by J Bergquist at 7:52 PM