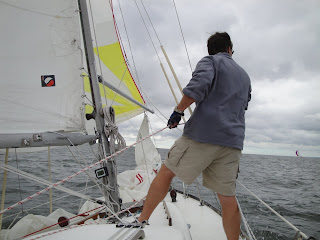 Well fall sailing has arrived with cooler weather and for at least one day some good wind. On the race down to Oxford it was good wind either directly astern or slightly off the starboard quarter. Once we turned into the Choptank, it was conveniently on the port quarter all the way to the rockpile marker at the mouth of the Tred Avon River. We were able to make it to the finish line on one tack. All the way from Annapolis to Oxford with one jibe in less than 6 hours – good fun.

The start was fairly non controversial other than a Catalina motoring through the box as we were making our final approach – about 15 seconds to go. Both Lanny and I had some choice words for him. LinGin, Windswept and Laughing Gull all went to the upwind side of the course. Argo, contrarian as always, took off for the lee side of the course. About a mile down the course, we all raised our chutes with a beam to a broad reach all the way down to Black Walnut point and the Choptank River. By the time we reached the north end of the Poplar islands. LinGin had the lead, followed by Argo, Laughing Gull and Windswept. This established the order for the rest of the race. 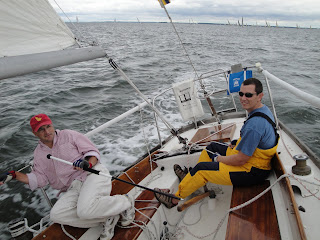 We all got moored at Cutts and Case, and went into town for the party at the Tred Avon Yacht Club, followed by dinner at the Masthead. By the time folks got back to the boats, the rain was really coming down. I fell asleep to the sound of a card game on LinGin, and the patter of rain on my fore hatch. 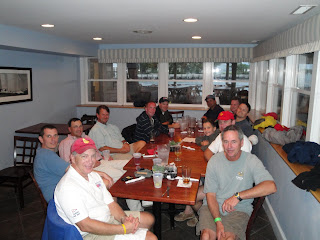 The following morning, TC and Lanny managed to convince me to register for the race. I had not planned it as I only had one crew, and I wanted to explore Knapps Narrows. This was not to be – TC reminded me that he and his pregnant wife had doublehanded back some years ago after a hurricane, and so surely I could do it that. In addition, and perhaps more importantl, it would be good to have another boat to keep our participation numbers up. Anyway we all left the dock rather late. Argo’s engine was not starting so he got the tow, and we arrived just in time to hear a gun (or a horn I cannot remember). This happened concurrently with the check in boat telling me that this was our start. I looked over to see LinGin heading across the line and down course. This created a panic – up goes the spinnaker , down goes the genoa, the boat is sailing wonderfully towards the fist mark. I look over and LinGin is headed back over the line. What devious cunning - he had feinted the start!! I thought about keeping on. In one sense I had not planned on racing, and was there to keep our numbers up, but that just is not me. Down comes the chute, up goes the genoa, and we hot foot it back to the start; flip around; up goes the chute; down comes the Genoa. There were only two of us aboard, and by the time this was done, we needed a beer!

The wind was 10 – 15 knots until we got out of the Choptank, and then the wind started to die. By the time we reached the bottom of the Poplar Islands, it was looking pretty grim. At one stage, we were thinking that we might be able to catch Windswept, but the wind kept falling. When it became clear that the six hour time limit was going to expire we called it quits. LinGin had anchored close to the island to make sure the current did not carry her away from the mark, and Argo had found herself anchored in the middle of the Bay in about 55 feet of water also becalmed. At that time, TC was still racing, and declined our offer of a tow. He later got the engine started. LinGin crossed the line at 6:05 – close but no cigar. The picture of Argo below shows how calm it was. 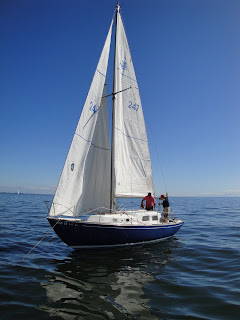 This is one of my favorite races. It is a long one especially if the wind is down, but the Choptank is a beautiful river and there are invariable less motorboats than other parts of the Bay. The Tred Avon Yacht Club is great fun. They run a good race, and invariably puts on a good party with a band and an excellent location. To top it all off Oxford as a town is pretty and unique. My preference would have been to take another day, exchange the racing crew for family and do the exploring I was thinking of; logistics being what they are this was not to be - perhaps next year.

All of the pictures are on the web at http://picasaweb.google.com/sven.finnis/20090913Oxford?authkey=Gv1sRgCKqf-O-_obzhDg&feat=email#
Posted by Laughing Gull at 2:54 PM