A squall greeted competitors for the first wednesday night race of the 2009 season. We clocked a few gusts in the low 30's in the pre-start which made for a sporty ride out to the race course. But at race start time, the clouds cleared, the breeze dropped to a reasonable 10-15 kts and we enjoyed a nice downwind start. 3 boats made it to the line for an on-time start: Harry, TC, and myself. I am not sure where everybody else was...since we have 7 boats registered where were the rest of you guys? Anyway, Harry and I elected to go with jibs for the start and then hoist the spinnaker afterwards. On my boat, this turned into a bit of a mess as we got a halyard wrap which took some doing to clear... Once we did, we were in a good position to get some nice shots of Harry and TC from behind: 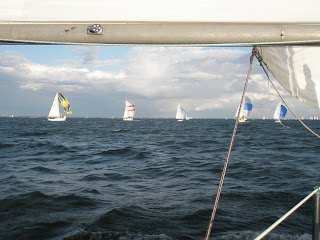 Harry could probably do with a bit of spinnaker trim on in this shot... 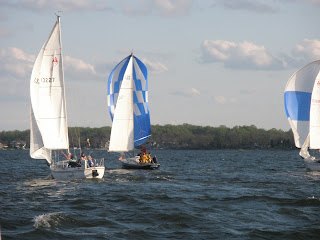 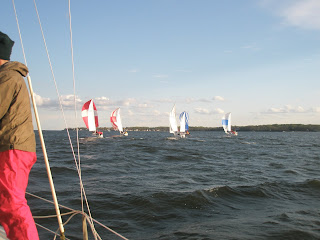 This was about the time when we realized there was some ambiguity in the sailing instructions concerning exactly what the course should be. Ultimately, we elected to go with what seemed to be the fleet consensus that the short turning mark was the last mark of the 'A2' course that had been called. TC (and Tim who arrived late and was racing with the woodwinds...) apparently differed in opinion with us on this point and so they continued out to the mark that the previous fleets had rounded. We had a pretty disastrous leeward mark rounding (early season rustiness still needed some shaking out...) Anyway, the splitting of the fleet had the result of making our beat into kind of a 2-boat horse race. As we came into the harbor, we very nearly caught Harry, but we got squeezed up by a J-30 at the can, forced to tack, and this was enough to allow Harry to pass us again...disappointing. Anyway, Harry wound up with the gun, we got 2nd, TC got 3rd, and Tim was TLE. It was a beautiful night on the water, and a good start to the 2009 racing season. You can see the full results at:

Congratulations to Harry for winning the first WNR of 2009! Hope to see some more of you out there next week! 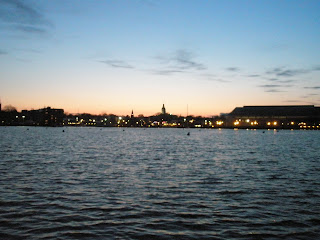 We enjoyed a beautiful sunset over the Annapolis skyline along with a couple of frosty beverages...
Posted by J Bergquist at 6:14 AM